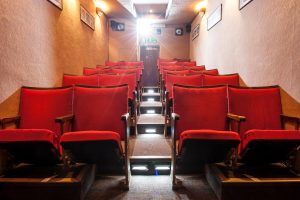 “Unique” is an overused marketing tag, but when it comes to screening venues, it’s hard not to include this word when describing The Vintage Cinema Bus. In 1967, following a prototype phase, The Ministry of Technology built seven custom mobile cinema units to tour the country, promoting modern production techniques to British industry. In the mid-70s the Government sold off the mobile cinemas, and this one, rescued from a field and in a state of decay, is the sole survivor as far as is known.

The Vintage Cinema Bus has been restored and is now reunited with its custom trailer, rediscovered in a farmer’s field in 2015.

Now available for hire (great for corporate and cast-and-crew screenings), the 22 fully upholstered tiered seat movie theatre is sound insulated and climate controlled. All films are shown on the high definition digital projection unit, complete with Dolby 7:1 surround sound for that full cinematic experience. Affectionately called ‘Audrey’, she has recently become a little bit of a TV celebrity, with appearances including the BBC series The Reel History of Britain, and George Clarke’s Amazing Spaces. For hire enquires email [email protected]